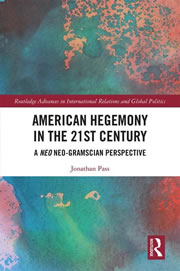 J. Pass, "US Hegemony in the 21st Century: A Neo Neo-Gramscian Perspective"

For many years now debates over America hegemony and its supposed decline have circulated academic circles. The neo-Gramscians have greatly enriched our knowledge in this field, developing some key theoretical tools and concepts, yet ontological inconsistencies, notably the downgrading of structure, has meant their explanation of the dynamics of the contemporary world order remains somewhat incomplete.

In this book, Jonathan Pass aims to counter such oversights, drawing directly on the ideas of Antonio Gramsci (amongst others) to elaborate a more sophisticated, overtly materialist, theory of world hegemony, rooted in a critical realist philosophy of science. Through the lens of this Neo neo-Gramscian (NNG) approach the book examines the complex interplay of internal and external social forces responsible for the evolving 'nature' of US hegemony, from its establishment in the 1940s, passing through its different stages of crisis and restructuring up to the present. China's spectacular rise undoubtedly constitutes a 'world event', but is it potentially a 'world hegemon'? The book seeks to sheds some light on this question, analysing the economic and geopolitical significance of China's emergence and how it affects, and is affected by, both American hegemony and its own extremely delicate 'passive revolution' at home.